In producing my sculptural work I like to use materials appropriate to the piece itself. This can sometimes be technically challenging but I enjoy the experimentation and the learning off new skills.

Some of the work is simply a play with material and form such as the natural forms exploded in scale. Others are more like visual poetry, using visual metaphors and references as well as colour and form to generate an emotional response. In some ways these pieces are riddles in that I tend to be deliberately ambiguous and to offer the viewer multiple ways to interpret the work.

For several of the more ambiguous pieces I have provided some background information about the ideas that formed them.

An ancient clay tile from a fortress in Afghanistan with a game scratched into it. Two great powers make their first moves. 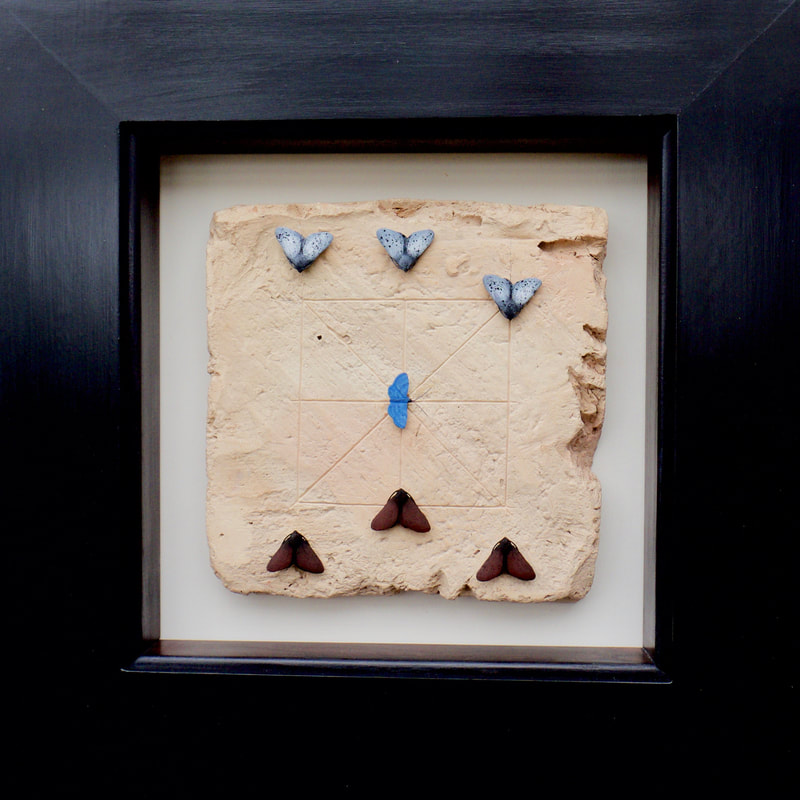 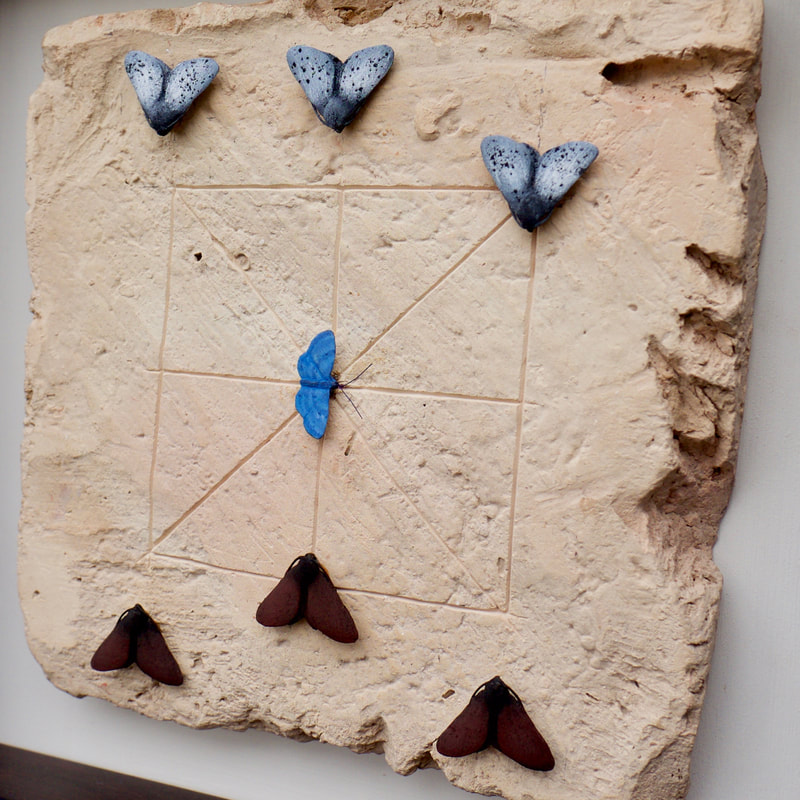 On Parade is a sculpture based around 28 cast metal moths representing a pass out parade at the Royal Military Academy, Sandhurst. Read the full story behind the work here. 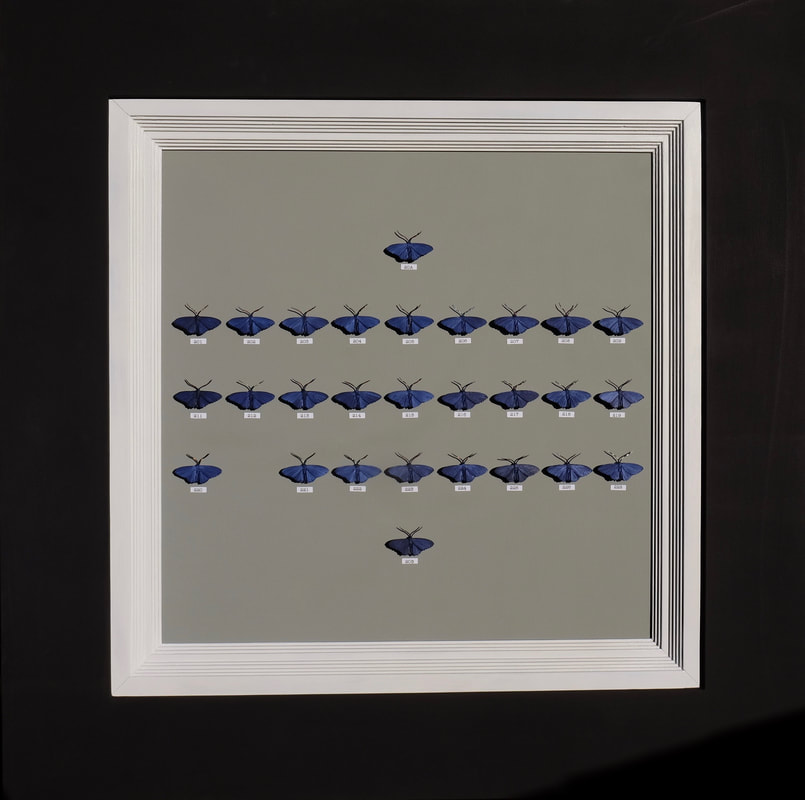 2011
Lead, plaster of paris, gold leaf, glass.
60 x 160 x 4 cm
Private Collection
​'Testimonial' is my response to a poem by my friend James.
James and I were in the same training platoon at the Royal Military Training Academy Sandhurst along with fellow officer cadet Rupert Thornloe. Rupert had some rare qualities and he excelled in the Army eventually becoming Commanding Officer of 1st Battalion, the Welsh Guards. Devastatingly, in July 2009 he was killed by a road-side bomb in Afghanistan becoming the most senior officer to be killed in that war. Following his death James wrote the poem ‘Breakfast 3rd July 2009’ (below) and on reading it I immediately felt a strong desire to respond to Rupert’s death in my own way. James’s poem made me think not only of Rupert, but of all of us within our close knit training platoon those 20 years earlier. I felt, therefore, that all of us who had been in 2 Platoon, Amiens Company, had to be represented somehow. I also wanted to explore themes such as the transformation of reputation which occurs when people die and to reflect some of my thoughts on the process of ‘the making an officer’. The moths represent all of us in our platoon and below each of us is our actual rifle number (I am 222). The arches are a reference to the arches of the Academy’s Royal Memorial Chapel where every officer killed in action has his or her name painted onto one of the internal columns and where we furtively nodded off during interminable Sunday morning sermons. We are elevated because that’s what Sandhurst is supposed to do – to raise people up and turn them into leaders. Whether we deserved to be considered leaders is debatable but we were certainly encouraged to believe we were ‘special’. In our representative form we are made of moulded lead, a base metal reflecting our inexperience and a reference, also, to lead soldiers and the ‘moulding’ process of institutionalisation.

The golden moth is Rupert who has ‘fallen’ in the most literal sense – and transformed… but the great irony of the piece is that in many ways he really was, perhaps, the best amongst us – hence the title ‘Primus inter Pares’ (First amongst Equals).

Breakfast, 3rd July 2009  (On 3rd July 2009 newspapers reported both the death of Lieutenant Colonel Rupert Thorneloe, aged thirty-nine, in Afghanistan and the fortieth anniversary of the Apollo 11 mission to the moon)

Turning to the paper’s middle pages
I’m reminded that forty years ago
those men were sent in such a fragile craft
that President Nixon rehearsed a speech
to tell us they wouldn’t be coming back.

Buzz had brains of a rocket scientist
and the courage of a fighter pilot;
Neil Armstrong was a leader with the faith,
I think, of an archbishop and Michael
Collins could wait alone knowing some things
can’t be helped. And you
I hadn’t expected to see you
on the front of the newspaper.

I had always thought that you’d come back
laughing with stories and Pashtun carpets
to hide the sadder moments, maybe,
a sense of disquiet, well perhaps,
but I thought you’d be back from Helmand.
I still have the Billy Bragg cassette
you lent me at Sandhurst; you liked
Philip Larkin. Humanity

was a faith we shared; observation
a gift we both practised. I wanted
to borrow some of the other gifts
but you could not offer them. And now
what I never had isn’t there -
just your face, no, I mean your faith,
at breakfast.

A link to James' website can be found here: whatthebiblecouldhavesaid.com

Plaster of Paris moths pinned to WW1 medical stretcher. 191 x 72 x 4 cm, 2011
‘In Parenthesis’ was made in early 2011 and was a reflective piece as I approached the end of my military career. For a number of reasons the piece provided a rather cathartic emotional release. In a way, it invites a directly opposite response to ‘Vessel’ which is an optimistic piece of work. The title is borrowed from David Jones’ haunting and epic prose-poem based on his experiences in the First World War. In his prologue he describes his war years as written in a ‘kind of space between’ and describes the war itself as a parenthesis. Similarly, the years of my military service sit somewhat incongruously between leaving Art College and re-engaging with the art making process some twenty years later.
​
In this work, as with many of my works, I have presented the piece as a kind of riddle with clues in the materials and layered references which are sometimes literal but often deliberately ambiguous to entice the viewers to discover their own meaning. The canvas is a British medical stretcher from the First World War and the moths are made from plaster of Paris, traditionally used by both artists and medics. Flags, war cemeteries and tented camps are amongst the more literal references. 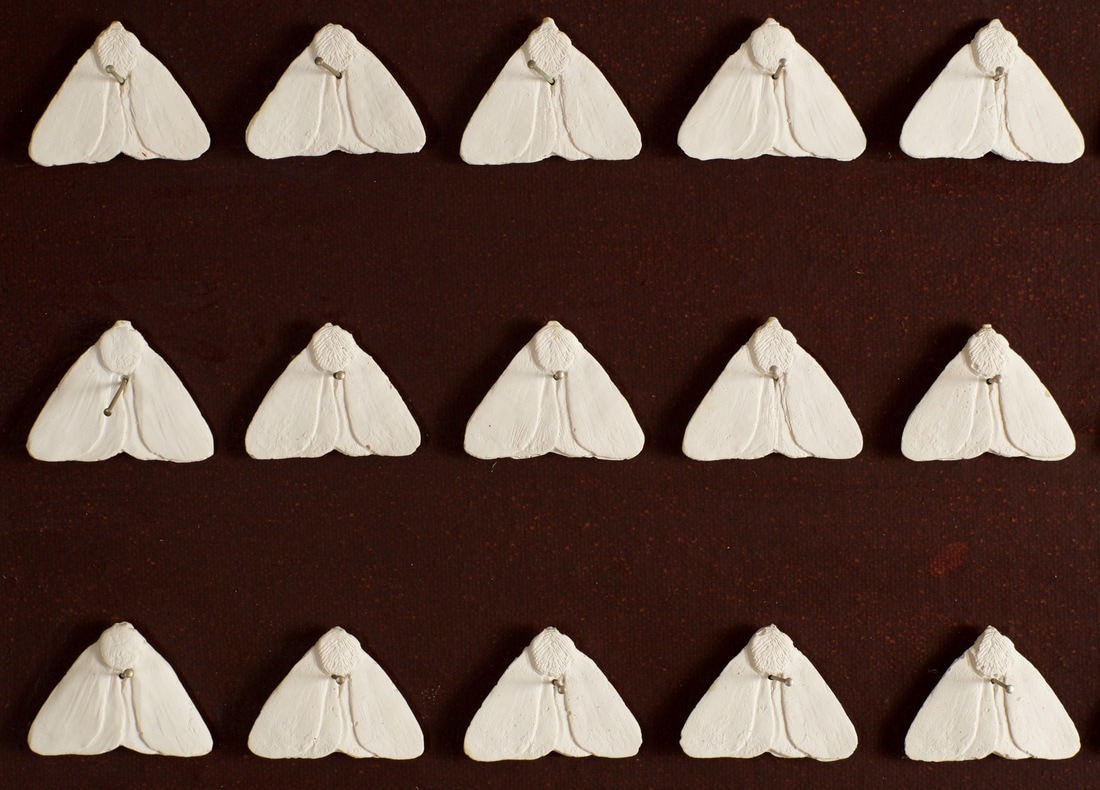 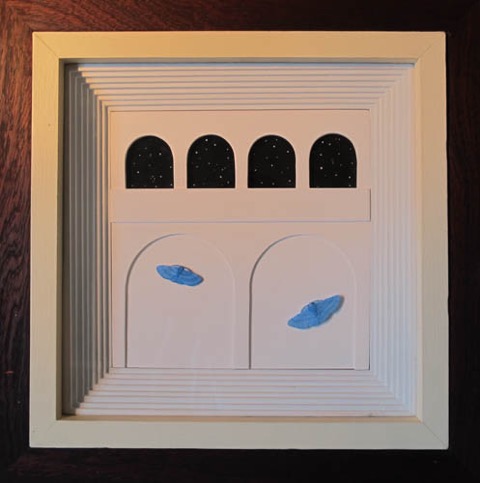 In God we Trust 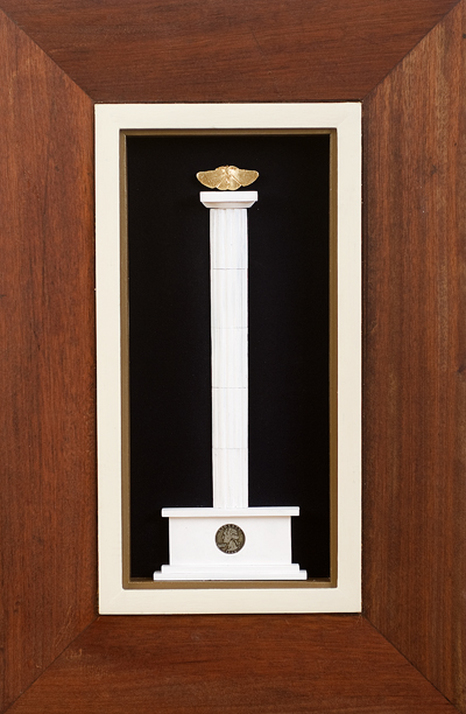 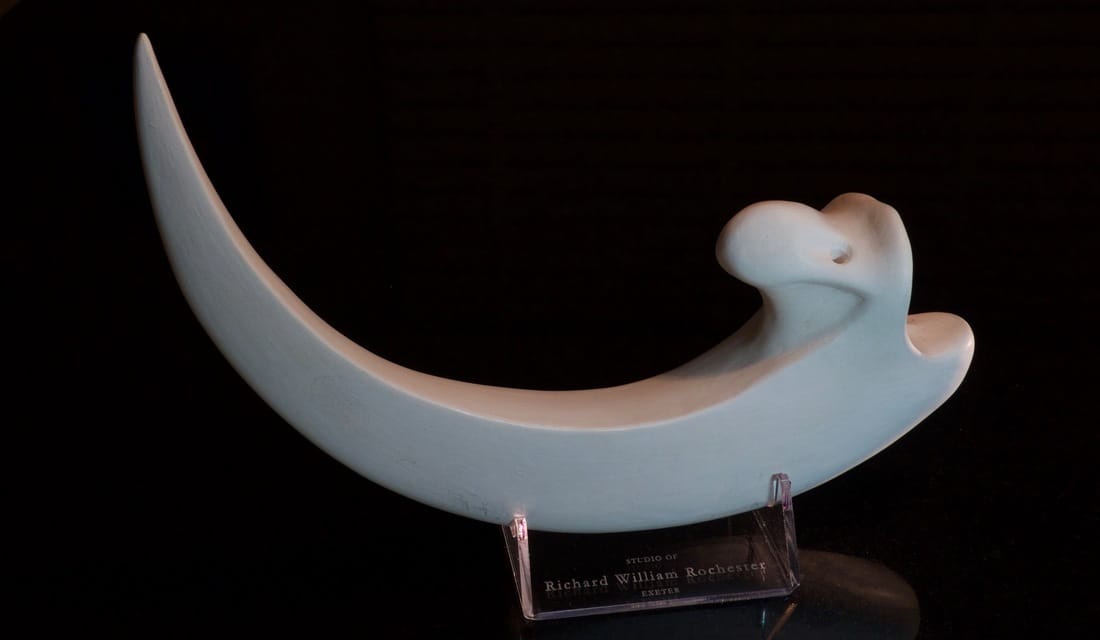 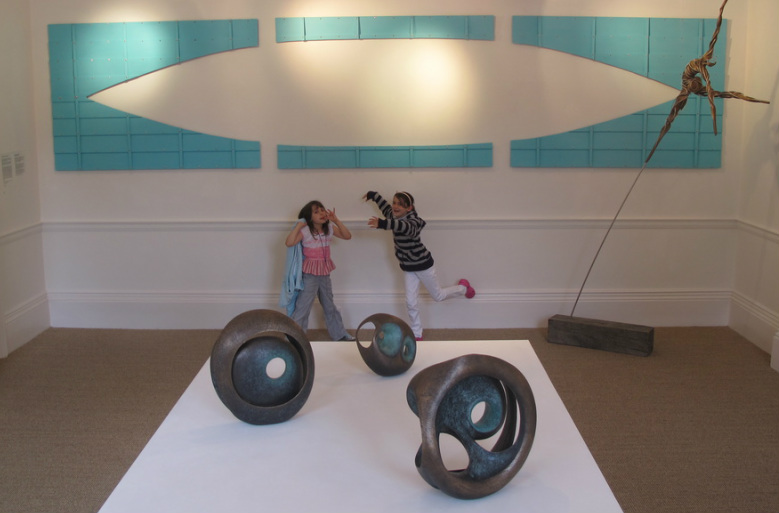 Vessel in 'Paragone - Painting or Sculpture?' at Gloss with daughters and Michael Gordon-Lee bronzes in foreground.
For some time I held, in my mind, the idea of a perfect, simple sailing boat; a physiological anchor which, when one imagines oneself sailing away in it, has a calming and peaceful effect. Like a white dove, the boat symbolises freedom; in this instance in the broad context of thought as well as movement. Having previously built a wooden canoe, I considered trying to build this perfect craft but began to realise that, whilst I could conjure up the essence of it in my mind’s eye, it was not possible to create a reality of it. What was perfect for me would not be for anyone else and it is probable that even I would be disappointed with the final object. The idea then emerged to build the vessel as a void within which the viewer could imagine their own perfect craft. Having decided to approach the piece in this manner the challenge became that of context and aesthetics. As far as possible, I was keen for the piece to have a timeless quality and, whilst the visual references to boatbuilding which I have used are not truly timeless, the chosen construction method of wooden planks secured by copper rivets and strengthened by internal ‘ribs’ of wood was first mastered by the Vikings and lasted, as a common construction method for working boats, right up until the advent of fibreglass as a common material in the 1970s. Beyond this, I have simply enjoyed playing with colour and form with the polished copper rivets contrasting beautifully with the matt turquoise painted wood.

I re-modelled the piece in 2014 before it took up it's current home in Boston Tea Party Cafe in Exeter. 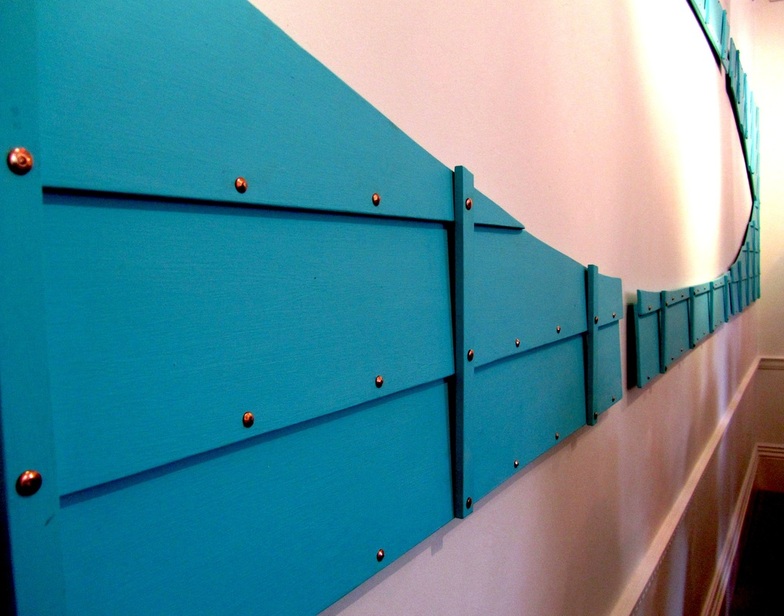 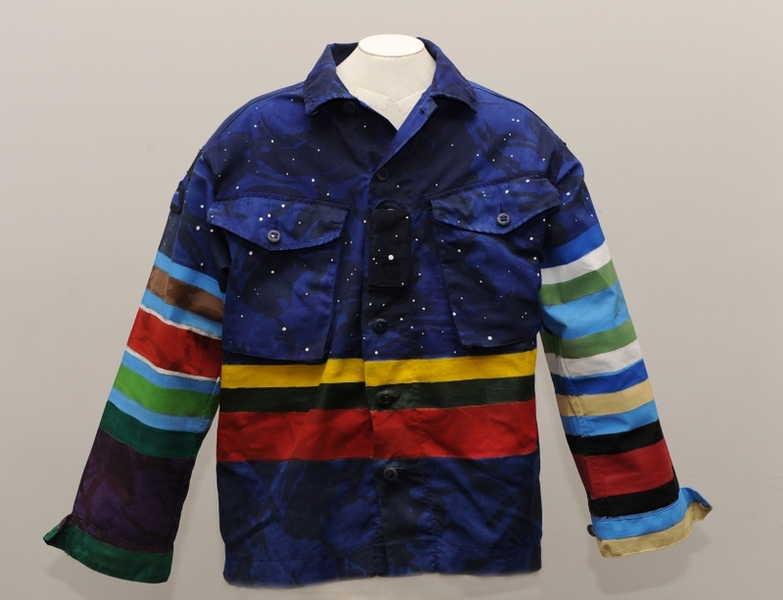 Images copyright of Royal Albert Memorial Museum
War Shirt was made as a direct response to the Warriors of the Plains exhibition at the Royal Albert Memorial Museum. I was drawn to the war shirts of the first native tribes and wondered what my war shirt would look like if the practise existed in today’s British forces. The shirt is one I wore on operations in Afghanistan. The colours relate to regimental colours and my operational medal ribbons. The starscape is painted on the shirt to ensure that I always know where I am – a direct response to the very real anxieties I experienced in training and on operations about getting lost. The triple white dot motif is what, in modern day parlance, might be called my 'tag'. Throughout my military career I used the triple white dot pattern to mark my kit so that it could be easily identified in poor light so this seemed an appropriate device. 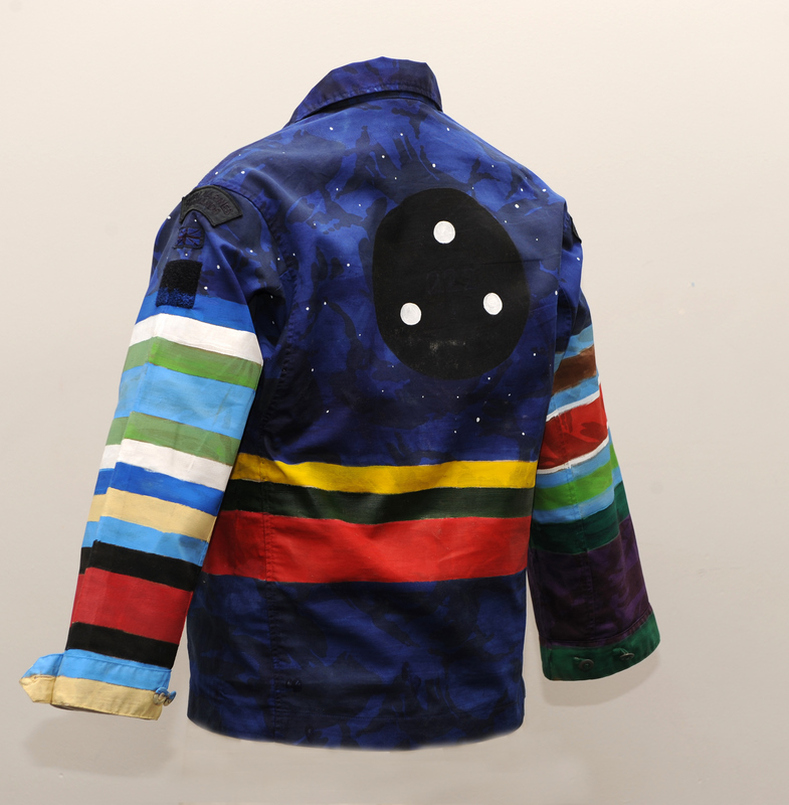